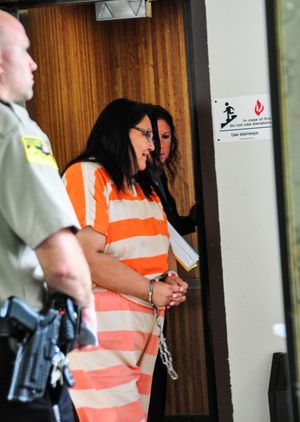 In this photo taken on Tuesday, Aug. 18, 2015, Janice Howe exits the elevator at the courthouse after a hearing, in Pierre, S.D. (Phu Nguyen /Capital Journal via AP)

South Dakota — Family members of a Crow Creek Sioux Tribe woman who has spoken out against South Dakota’s handling of Native American children in foster care are questioning whether her arrest on a 13-year-old charge was politically motivated.

But Sara Rabern, spokeswoman for the South Dakota Attorney General’s Office, said Wednesday that the arrest of 54-year-old Janice Howe, of Harrold, is simply a case of authorities finally catching up with someone who has been able to evade an old warrant.

Howe pleaded guilty Tuesday to one felony count of perjury related to petition signatures she gathered in 1999 for a proposed constitutional amendment. In exchange for prosecutors dropping several similar…

This entry was posted in Uncategorized. Bookmark the permalink.